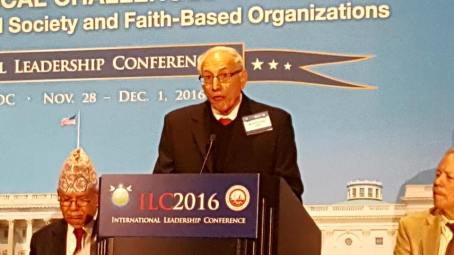 The following article is based on a presentation journalist Pinhas Inbari, a member of the Jerusalem Peace and Security Forum, gave at a meeting organized by UPF-Israel following his participation in the International Leadership Conference (ILC) in Washington, D.C., from November 28 to December 1, 2016.

To understand the sort of danger that has taken shape in Syria to Western civilization, we must [take] a closer look [at] the kind of war that is raging there. It is a total war…It is a war of eradication; I eradicate you and you eradicate me. Thus, all the parties that are fighting in Syria are terrorists; but, at this stage, the Shiite terrorism prevails thanks to the Russian intervention.

When we say "eradication" we mean changing the face of the earth…not only [by] the total genocidal “cleansing” of territories, but also [by the] uprooting of landmarks of civilization. [There is] no regard to holy places; the Sunnis destroy Shiite mosques and the Shiites destroy Sunni mosques. But now that the Shiites have the upper hand, Syria [will turn] from a dominant Sunni country to a Shiite country. This is the nature of the war in Aleppo; it is not about scoring a victory for the Shiites, but it is mainly to kill and terrorize the Sunnis out of Aleppo to make it a Shiite center that will connect Damascus with the Shiite-Alawite center along the Mediterranean coast [of Syria]. While [a] large [percentage of the] Sunni population [has been] scared out of Syria—first to Turkey and then to Europe, the Shiite population is [being] invited in from Iraq and Pakistan waiting to be resettled in evacuated Aleppo. According to sources in the Syrian opposition, half a million refugees from Iraq are already re-settled across evacuated areas in Syria. In this sense, we may say that the Shiite foreign mercenaries are also fighting in Syria for immigration in new domains at a later stage.

That's why the Shiites are keen to destroy all traces of the cultural landmarks of Sunni Syria. A special example is the tomb of Khaled bin al-Waleed, the Muslim general who conquered Jerusalem in the first century of Islam 1,300 years ago. The tomb of the great general in Homs was revered through generations by Sunnis is now destroyed, probably by the Shiite Hezbollah fighters [who have] no respect [for] the history of Islam.

Khaled bin al-Walid tomb near Homs in its present shape

The great Umayyad Mosque in Damascus was not demolished [by the Shiites], but [became] a Shiite Husseiniya (a Shiite place of worship), [which is] a major blow to Sunni history [that extends] far beyond the borders of Syria.

Why should this concern the West? Because what we experience in Syria can spread to the West and, in particular, to Europe. The total terror, a kind of terror that aspires to wipe out civilizations, is not limited to Syria alone—but to the entire world. ISIL is keen to spread this message to the West in its English bulletin called Dabiq. Why [is it called] Dabiq? Because Dabiq is the name of the place that, according to Muslim doomsday scenarios, will be the place where the armies of Christians will be burned down in the end of days. That's why the poor Jordanian pilot, Maaz Kassabeh, was burned alive by ISIL—to send a "Dabiq message" to the [U.S.-led] coalition [in Syria in which] Jordan took part.

In practical terms, it means, for Europe, there is no option to negotiate with them to find some formula for coexistence—similar to the "Political Islam" that was brokered with the Muslim Brothers to help them overtake the Middle East through "elections" and, in return, leave Europe untouched by terror.

I [participated in an online] conference that took place in London on the eve of the [terrorist] attacks in Paris and Brussels. One of the main speakers found an encouraging [aspect of] ISIL establishing a "state." He was of the opinion that now that ISIL must take care of the population under its responsibility, it might lessen its appetite for terror. One [may infer] that Europe will offer them aid to establish a proper state in return for avoiding terror on European soil.

But this analysis is incorrect because of the misinterpretation [of what] the term, "state," [means to] ISIL. In modern Arabic, dawla [refers to] a state, but in classical Arabic, it is precisely the reverse. Dawla does not refer to a "static, solid" situation as is connotated in modern Arabic, but refers to a "moveable" situation. Tadawul in Arabic [means] “change." By choosing the word dawla, ISIL wants to [communicate] the message that wherever it is—in Afghanistan, Sinai, or Libya—it is fighting the West, and [that its] war in Europe is about to eradicate Christian civilization. Syria is only the beginning.

The West understood that something should be done against ISIL, but it did not internalize the true challenge of this kind of terror, [and therefore has employed] weak solutions to cope with the menace. One of the solutions was to use the Muslim Brothers, or in their Syrian version—the Nusra groups—to be the "boots on the ground.” But, what happened on the ground is that the Nusra groups and ISIL cooperated when they had to fight the Shiite and later the Russians, and then fought each other when no Shiite was around—but they were keen not to wage a war of eradication, but a kind of struggle over territory.

When the U.S. understood that the Nusra groups were of no use, they turned to the Kurds, who were the only party that was serious [about fighting] ISIL.

Using the Kurds as a major force on the ground is not easy, as Turkey might object because they perceive the ruling party in Syrian Kurdistan (an autonomous region in northern Syria), the PYD (Democratic Union Party), [a Kurdish political party established by Kurdish activists], as a threat to them. Once the Kurds prove to be a trusted ally, the West can reduce Turkey's concerns by turning [Syrian Kurdistan into a federated entity], similar [to what happened to] Iraqi Kurdistan, which Turkey trusts. This can be done by adding another prominent Kurdish group, such as the Kurdnas, who can help in turning northern Syria into a friendly entity to Turkey and at the same time be a trusted ally to the West.

Something serious must be done. Syria is not the end; [it] is only the beginning.