After long delay IDF began last night "operation Solid Rock" to meet the challenge of non-stop launching of missiles from Gaza on the Negev towns.
Unlike in the past the main reason for the current round is not ideological or pure political but financial- the Hamas bureaucracy is not paid for some 4 months now—including the Qassam Brigades personnel and they fight now for their salaries. Of course they cannot say it—they publish honorable demands such as releasing prisoners etc. but under the demand of "removing the siege off Gaza" they conceal the real issue of salaries.
What is the problem? As a result of the tension between Saudi Arabia and Qatar- Saudi Arabia is vetoing Qatar financing of Moslem Brothers movements across the Middle East that includes Hamas. Moreover, Saudi Arabia and the Gulf pinpoint in Hamas' victory in 2006 elections and then the takeover of Gaza as the beginning of the "Arab storm" that engulfed later the entire region and the source of the problem. Hence, the downfall of Hamas can be evaluated as strategic target for Saudi Arabia and the Gulf.
Qatar is ready to pay the salaries, but banks such as the Arab Bank are deterred of transferring the money by the Arab powers.
Egypt tried to mediate in order to convince Saudi Arabia to make Hamas an exception of the total ban on financing Moslem Brothers but apparently failed. Al-Jazeera reported last night that Hamas was also disappointed to listen to president Sisi address two nights ago in which he totally ignored the Gaza situation. Hamas sources told al-Jazeera that Sisi's address differed totally from Mursi's approach during the former showdown in which he warned Israel of attacking Hamas. So, also the distrust between Hamas and Egypt avoided so far a success of the mediation for new ceasefire.
But the salaries are not the only issue. The cut-off between Gaza and Sinai led Hamas to shift its weight from spreading into Egypt to join the Islamist revival in the Levant. Hence, after long negligence of the West Bank, Hamas carried out the kidnapping and killing of the three Israelis in Gush Etzion in order to lead the West Bank towards a reach out to Nusra – Hamas ally in the Yarmuk refugee camp – to replace the failed attempt to join up with Egyptian Moslem Brothers to a joint thrust towards a Caliphate based on Cairo to a Caliphate based in Damascus or Baghdad – although we don't know about any connection between Hamas and ISIS, while the connection with Nusra is well-known.
Hamas doesn’t conceal its goal to drag the West Bank into the fray but as for now the West Bank is not dragged. The West Bankers are not dragged for long time to the "Popular Intifada" and even after the brutal murder of Abu Khdeir, the West Bankers left the east Jerusalemites to protest alone and Hamas is trying now to change this disappointing phenomenon. The Israeli Arabs joined the east Jerusalemites instead- what made the issue an Israeli one uniting east Jerusalem with Israel instead of uniting east Jerusalem with the West Bank- and we shall elaborate on it in separate opportunity soon.
The Israeli goal is not the re-conquer of Gaza and Lieberman's call in this respect is not accepted by the other parts of the government. Israeli goal is the resumption of the deterrence of Hamas and reaching new deal of cease-fire.
Hamas has no money to run a long and expensive showdown and an unplanned war may well end up in its downfall- a goal that also Israel wants to avoid. Israel will operate in a way that will sharpen Hamas' role as the only government in Gaza and cause the end of the unity government.
There are signals that Hamas is getting the message and they began to talk with the other PLO factions of the establishment of a governing body in Gaza that will play the role of a government. Hamas will not return to assume sole power in Gaza and follow the example of Tunisia of sharing power. We do not exclude a grand appeasement with Muhammad Dahlan after Hamas provided shelter in Gaza to the persecuted Fatah cadres that fled out of Ramallah after being attacked by local Tanzim comrades.
Sum up- Israel entered this round in Gaza unwillingly and will be happy to finish it the sooner the better. The problem is that Hamas- and to be more precise – the Qassam Brigades – is pushing to escalation. There are two reasons for this- to enable the reception of steady payment to its personnel and an attempt to ignite the West Bank in order to shift the onus of Hamas outspread to the Levant instead of Cairo. 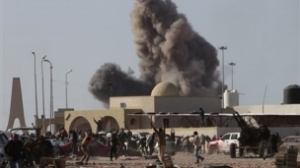